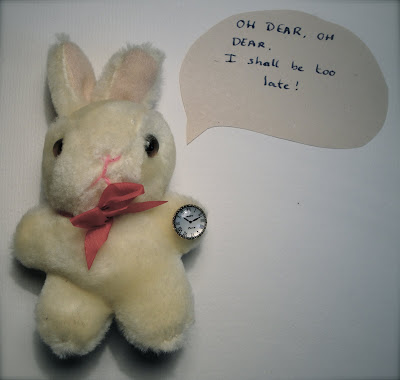 Late? Late? What are you talking about, you funny little rabbit. 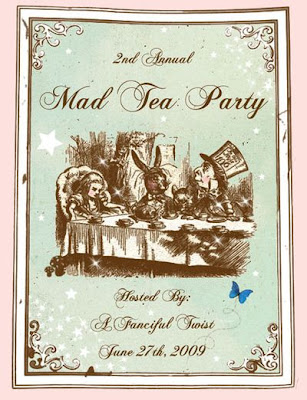 About this^ of course!
Don't you remember that you were almost the first to sign up when Vanessa invited you? It was May 18th. You were thinking that you would have plenty of time. Remember?

Of course I do. But how is it possible that I don't have anything ready for a blogpost yet?
'Aren't you supposed to be white?' I asked the rabbit to avert him a little. 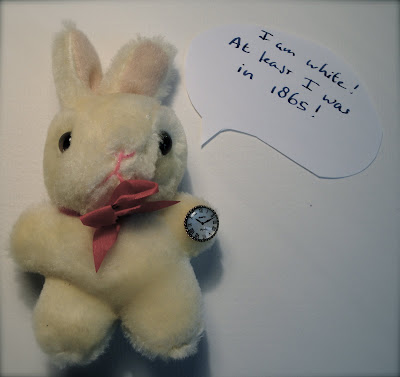 Look at the flyer; Is that rabbit white?
and look at this: 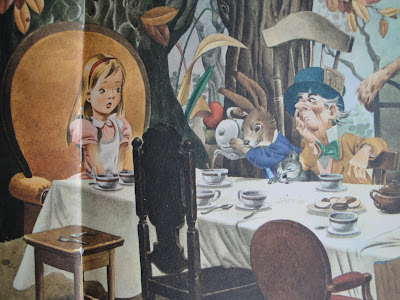 My dear LiLi and other readers:
It doesn't matter what color the rabbit is, the story remains the same. I reveal another secret: neither should it matter to you my friends what color anybody has.

Now look at this again: 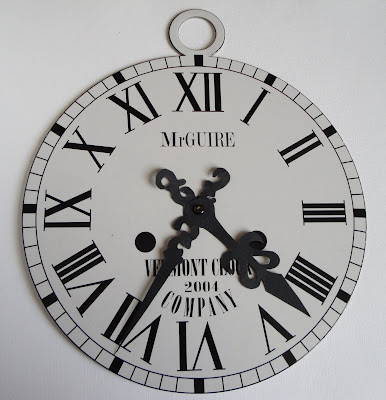 Yes, we shall be too late, Vanessa and the others will be sooo disappointed..the rabbit took his little hanky: 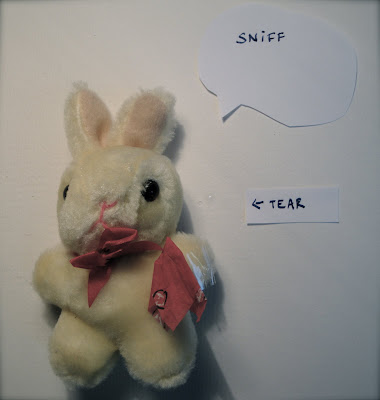 'Ah don't be silly', I replied, 'Vanessa is still asleep. We are having Saturday, but she is still having a groovy Friday Night.' 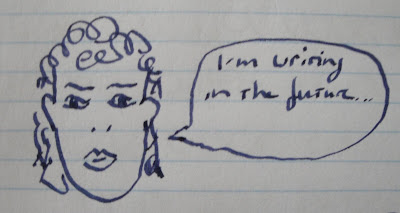 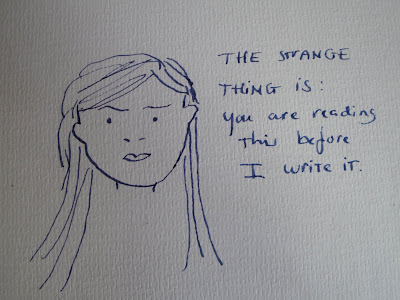 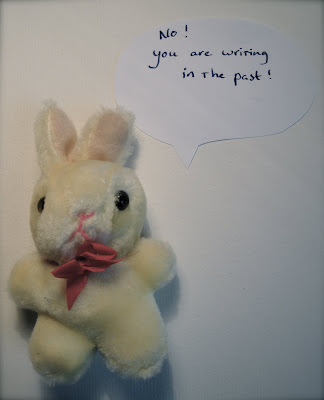 Ah! What about time?

Time is a concept. It is hard to realize, but we people invented time. Before the 12th century the medieval western person didn't know the clock. Of course there was a concept of time; Every day a new day started, followed by an afternoon, an evening, a night. The seasons were following each other back then too. After 4 seasons it all started again. Time was like a circle. Life was a cycle. It was after inventing a clock that the time concept became linear: 9 pm today never comes back.

Time is an agreement: we have decided that it is 8.00 am over here, the minute I'm writing this down. It is 11.00 pm on the previous day, where Vanessa lives. That's an agreement too.

What I want to say is that you don't have to be in a rush all the time. Time traveling is possible nowadays; I can hop on a plane and save time, but you really don't save time that way. Just spend your time wise. As you think is wise. Time was invented to make life easier, to make it possible to make appointments. Don't let that agreement take over your life. Like they do at the Mad Hatters tea party, where it is always tea time, because the clock says so.
Relax!

Let's spend some precious Time at the other guests at Vanessa's Mad Tea Party.

Lili,
You are my first stop today and I have so many places to be…
What a wonderful and wise little rabbit you have to remind us all to take time
to smell the red painted roses and use our days with care.

Have a good day my dear friend,

Such a Wondrous Place this Faery Space said...

LiLi, what a great post...the wee bunny is totally adorable...even if he worries a bit too much:) i hope you are having {or had} a great weekend!!!

Good morning LiLi!
Wonderful post! Nice little bunny too!
It's fun to have an all around the world Mad Tea where any time is the right time!
Also, interesting to read about the history of time. I don't wear a watch, do you? I bet not.

Awww, so sweet! *Love* the creativity here, so cute! A great place
to
♥relax♥
Thank you! xoxoxoxox

CUTE! Sweet little bunny, he'll have a special cake just waiting for him!

I hope you'll visit my Tea Party and see what I'm decking out the party-goers in!

So adorable! I hope you have a delightful day. Thank you for popping by my blog and for your sweet comments! I love all the pretties you post about. It looks like we both love vintage children's toys and books. Love your banners too, so beautiful.
Happy Day!

the bunny is so cute! have fun!

Time is an agreement but unfortunately for me time and I have agreed not to get along very well or I would not have these wrinkles around my eyes.

Lili, I love your sweet little bunny. What a delight way to look at time. Thank you.

Thanks to your white bunny for true words of wisdom!

Oh that silly concept of time...now I am truly confused! I am on the same time as our dear Vanessa (seeing as I live just up the hill from her) which is an agreement I'm sure, somewhere...kisses to the almost white rabbit!!

You are so right about time - we need to take more time to relax!

I'm just glad I took the time to stop and visit today! What a fun post!

What a perfect post about time! I love the little not-so-white rabbit!

You're madly invited to my tea party, I do hope you'll stop by (if you haven't already of course)! :)

You're invited to my tea party

Very wise message and a cute story with your little bunny...and no, his color doesn't matter at all.
Happy Tea Party Lili!

That is cute... I love how you made up the little story!

Thanks for your sweet comments on my blog! I always enjoy your visits to my blog! Thank you! :)

Great Party, sweet little Rabbit, do drop by our party if you have time. Lindax

hello Lili! thanks for you visit to my blog Bem-Trapilho. But I have another blog (http://bom-feeling.blogspot.com/) whish is translated in english, maybe you prefer it. it's a more generalist blog, but I also show there most of my crafts.
big hugg :)

Wipe that little tear drop up and join the party! That was delightful! Do stop in for tea with Alice and me!

A kiss to this sweet bunny! Thank you so much for having me at your whimsical place. Come on over to my party - if you haven't quietly crept in already....

I am sooooooo impressed with your blog and your art! Oh there is so much fun and creativity to be had by all and for all! Blessings to you dearest, Anita

A sweet bunny and good reminder on how we should view time.

I can relate to your post on time as it is always on my mind..which is sort of worrisome. I had to laugh at your comment about thinking we had plenty of time back in May..funny how I was shooting my night time shots at 12:30 this morning!! It never occurred to me that I've been the while rabbit this week and in the recent past..how appropriate:) HAPPY Mad PARTYING!

Such a cute post Lili!! I hope you are having a lovely time at the tea. ;)) xo Heather

I loved your post...and I loved the reminder...so true!

Lili,
This post is totally adorable. I think that your post for the Mad Hatter Tea is truly the most enchanting.

Today was my daughter's High School graduation party. So, just like White Rabbit, I am late for this very important date to visit everyone's tea!

wonderful post..thanks for reminding me how important it is to slow down!

You’re invited to please visit stop by and visit my party where we’re having a tea of a time!!

Thank you for being such a gracious hostess! I've had a wonderful time! Have a magical weekend! Twyla

A lovely tea party post, and thank you for the reminder to relax!

A lovely tea party post, and thank you for the reminder to relax!

Ah yes! The concept of time...sometimes it can be a maddening thing!!! If there were no clocks I would always be on time ;-). Happy Un-Tea Party Day!!! I too am LATE!!!

Loving your observations on time.

Interesting concept of time and your bunny is so sweet! I'd love for it to be tea time here all the time :)

Lovely sentiments. Stop and breathe and enjoy the moment, are perfect thoughts to share!!! I love the color older things take!

Thank you for a delightful visit, so cute, love your written messages too ;) ;)

cutest ever post. It DOES get a tad confuzzled when visiting over the ocean, doesn't it? Hope you had fun having tea, with white, brown or whatever color rabbits.:)

Sorry I'm late. I just escaped from my own mad party.
Thank goodness for time travel I didn't miss your enchanting party.

Wow...that makes me really really late for this fabulous party since you are a half a day ahead of me....no matter. :) I had a wonderful time. Have a super great week. ~ Lynn

Dearest Lili!
Well spoken! So true! My vacation is coming up and I intend to spend it very wisely.....on lots of mad teaparties and such! Wish you lived closer then you could pop by.... What laughs we could have!

I know I'm much too late ha ha but after what I read about time I'm totally relaxed and will not apologize.

I also loved what you said about color that should not count, not for animals and not for people, so true!!!

Nice to meet you Lili, very clever post and thought provoking. I like the changing banner you have also. I will be back and thanks for welcoming me it is great to meet so many people with all different perspectives. I love it!
Kim

Hi!
I'm glad you visit my blog. Your's so nice, too.Would you follow me, because I'm afraid to lost your blog.
kisses

It is so curious that these Mad Tea Parties are still going strong! I've yet to clean mine up, so please feel free to follow me back down the rabbit hole to Haute Whimsy before life goes back to mundane!

Too much fun!!! And I am going to take your advice and Relax!
Happy Party Hopping

Hi Lili, I don't arrived on time, but also I like to drink a cup of tea. Lovely post.
Hugs.

Time management is my downfall. I'll try to listen to the bunnie's advice!

Hi Lili of the Netherlands, I enjoyed wandering through your blog today. What a joy--I especially loved the Halloween garland you made. Paper cutting delights me. You personify Blissful Blogging and I will come back again and again, tea cup in hand.

Hi there, welcome to the world of LiLi M.
As in real life it will be hard for me to choose what to tell you. So many interesting topics, so many hobbies, so many things to tell you.
Leonardo Da Vinci 'l'uomo universale' is my hero.
He didn't choose a career as an artist or as an inventor, he just managed to have both careers and several more.
So welcome to the world of LiLi M. hoping to be 'una donna universale', you know what I mean.

I'm welcoming you to my world. I hope you will share something of your world with me; please don't hesitate to respond to my topics.
Thanx!

LiLi M.
Female-happily married- 2 kids -1 daughter 16 + 1 son 13 -Living in the Netherlands. I am a dreamer...I dream about everything, about decorating, about creating, about your blog and about mine, well you name it! Sometimes dreaming takes so much time that there is hardly any time left to do the things I have dreamt about. But I don't worry because I'm already dreaming of something else. I read a lot. Home decorating magazines are my favorites but I like to read literature too. I like to cook and to eat as well, chocolate is a favorite amongst many many others. I don't like narrow minded people. Come on widen your horizon as much as possible. Respect all!

All rights reserved. Please do not use any photo's or content from this blog without my permission. Thank you. L.

Yep I'm one of the 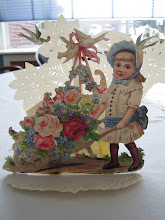 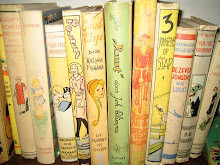 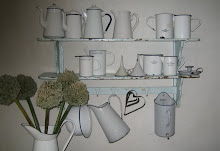 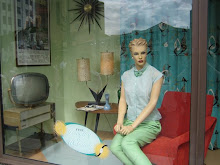 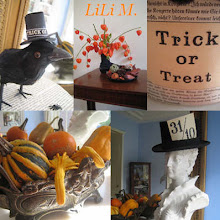 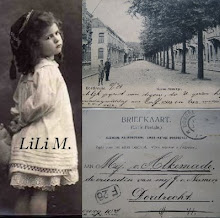